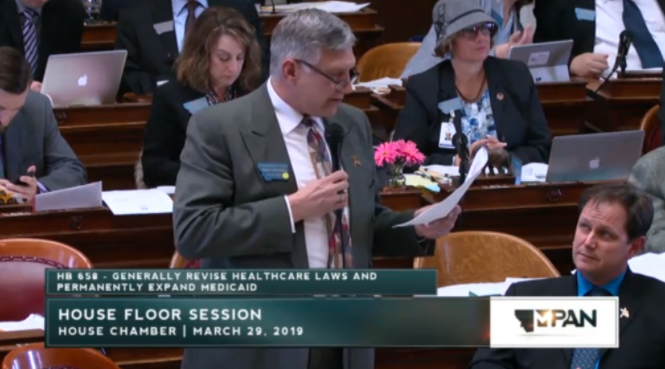 When Majority Leader Brad Tschida rose on the floor of the Montana House on a March afternoon last year to speak against one of the most consequential pieces of legislation to ultimately pass the 2019 session, he had a clear message for his fellow Republicans:

“Be aware,” he said, “that anyone who votes for this bill is going to need to answer to the people back home, without a doubt.”

The measure, the HELP Act, renewed Montana’s expanded Medicaid program, which provides government-funded health care coverage to more than 80,000 Montanans. Authored by Great Falls Republican Ed Buttrey, the bill re-upped the program with work requirement provisions designed to make it more palatable to right-leaning legislators. Even so, hard-right opponents like Tschida called the renewal a waste of public dollars and blasphemy against conservative values.

Medicaid expansion, Tschida said on the House floor, “sounds like a participation trophy for health care to me.”

“As a conservative Republican, I find it necessary to get up and speak,” Ballance said. “My rural hospital says the only reason they are still in business and viable today is because we took away some of the burden of the uncompensated care.”

The exchange illustrated two very different visions for Montana conservatism that have butted heads in the statehouse in recent years. Toward the middle is a business-first mindset that’s tight-fisted with public purse strings but willing to negotiate investments in health care, schools and infrastructure — an approach exemplified by the Legislature’s Conservative Solutions Caucus. And toward the right, a true-believer brand of no-new-taxes Republicans who define strict discipline to conservative ideology as their first and foremost legislative consideration.

The Article was originally published on For Solutions Caucus, the proof is in the primaries