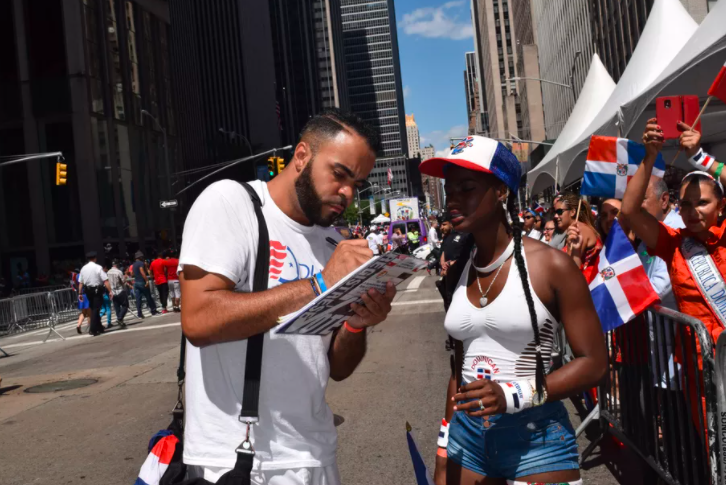 New Yorkers looking for a mail-in copy of the state voter registration form or any assistance at all in registering to vote during the pandemic won’t get any direct answers from the state Board of Elections’ dedicated hotline.

The hotline eventually routes English and Spanish speakers to other channels, such as county Board of Elections offices. But it does not offer an option for interpretation for New Yorkers who don’t speak these languages, nor does it provide information in the three other languages — Korean, Bengali, Chinese — that the registration form is printed in.

Then there’s the DMV’s online submission form: It’s only available in English and only accepts New York state issued IDs.

In a year with a presidential election where immigrant rights are front and center, the remote registration process and the prospect of voting by mail are proving daunting, advocates say.

June’s chaotic primary already featured absentee ballots that were requested but never arrived. High rates of absentee ballots were tossed out for reasons such as missing signatures and postmarks, and some races still haven’t been called.

Heightening general election confusion, the president of the United States on Thursday floated the idea of delaying the Nov. 3 election — something he doesn’t have the power to do. The last day to register to vote is Oct. 9.

“It’s a very difficult task even for an educated English speaker in New York,” said Chuck Park, the civic participation manager at the MinKwon Center for Community Action, a Queens nonprofit that serves Korean and other Asian communities.

“For someone who maybe doesn’t have a formal education and doesn’t speak English very well, it’s impossible without focused assistance to exercise their right to vote. … We are definitely missing a lot of voters.”

The state Board of Elections did not respond to repeated requests for comment on the language access options for its voter registration hotline.

Representatives of multiple New York-based community groups said they each tend to register tens of thousands of people to vote during a typical election season, and more during a presidential election year.

But with in-person canvassing and voter registration drives made all-but impossible by the coronavirus pandemic, advocates can’t reach these same numbers — and are unable to readily guide New Yorkers who don’t speak English well through the registration process.

Eddie Cuesta, the executive director of Dominicanos USA, a Bronx-based nonprofit focused on the Dominican-American community, said that during the 2016 election year, the group signed up roughly 30,000 new voters across the state.

This year, the group’s count is at about 3,000 people so far, a situation he called “very sad.”

“You’re losing all those opportunities,” Cuesta said. “It really puts our community at a disadvantage.”

He added that the group had received numerous complaints about language difficulties in registering to vote through the DMV website.

The city Campaign Finance Board found that new voter registrations have plunged during New York City’s shutdown, with about 80,000 residents signing up in the first six months of 2020 — roughly half the amount of new voters in the same time period for 2016.

Before the start of the pandemic, staffers from the Asian American Legal Defense and Education Fund, a New York-based national organization that advances Asian American civil rights, would visit naturalization ceremonies weekly to sign up the city’s newest Americans.

Judy Lei, a voting rights organizer for AALDEF, said that just a week ahead of the city shutdown in March, she registered about 120 new citizens.

“Some people sitting in the room have been waiting close to 10 years to become a naturalized citizen,” she noted.

Lei said she would even field questions from native English speakers about how to correctly fill out the form.

A Better System Is Ready

Advocates and good government organizations expressed disappointment that a bill allowing for a new online voter registration system is still stalled in the state Legislature. The bill, which would allow the launch of a new website already built by the city Campaign Finance Board, has yet to pass the Assembly.

Susan Lerner, executive director of Common Cause, said that with record absentee ballot participation in the June primary, now was a “prime opportunity to allow New Yorkers to register online.”

“NYC already has the technology all set up, we just need the Legislature to approve its use,” Lerner added. “Registering to vote should be simple and easy.”

The Campaign Finance Board’s online voter registration site would have been available in English, Spanish, Chinese, Korean and Bengali.

Registration forms for these five languages can be obtained by calling or emailing the New York City Board of Elections. Interpretation is available in these languages when calling the city Board’s hotline, said agency spokesperson Valerie Vasquez.

In a partnership between the Campaign Finance Board and the Mayor’s Office of Immigrant Affairs, the registration form is available in 11 other languages, including Russian and Haitian Creole.

However, the online request page is only available in English, because the city Board of Elections is not equipped to process the applications in these languages, a Campaign Finance Board spokesperson said.

“My worry is that by not having these reforms we are really doing a disservice to an electorate that is more politically engaged than ever before, that they’re not going to be fairly represented,” Torres said.