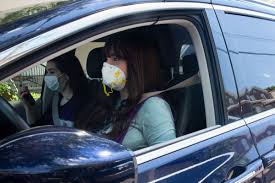 A dark blue Chrysler Pacifica minivan will no longer be the only emergency vehicle used by the ladies of Ezras Nashim: It’s time to go ambulance shopping.

“We really hope that we’ll have [the ambulance] within a month,” said Leah Levine, the group’s outreach director.

The certificate of need application from Ezras Nashim was okayed by a vote of 23-2, reversing the Regional Emergency Medical Services Council of New York City ruling last November that denied Ezras Nashim’s application after significant opposition from the long-established all-male EMS, Hatzalah.

The decision in favor of Ezras Nashim marks the final step in the administrative process and concludes more than a year of legal battles with Hatzalah over the right to provide ambulatory care in the Borough Park Hasidic community.

Looking for ‘a Good Deal’

Shopping for the perfect ambulance, said Levine, is the next step for the trailblazing ladies of Ezras Nashim, which formed to serve Hasidic women who adhere to traditional concepts of modesty.

“We want to get everything started,” she added. “In the past, we had people reach out to us and say, ‘When you get your license, we can give you a good deal,’ so we’re going to see.”

Ezras Nashim’s official certificate of need application lists a one-time estimated capital cost of $50,000 for a second-hand ambulance. Levine said the all-female EMTs are on the hunt for a smaller model of ambulance, also known as the Type II model in the emergency vehicle industry.

This type of ambulance looks similar to a van with a raised roof and is most commonly used by commercial emergency services. Unlike Type I and III ambulances differentiated by a separate square patient compartment, the Type II model is ideal for navigating narrow city streets.

Following the purchase and inspection of the ambulance, Ezras Nashim will no longer have to rely on FDNY to transport their female patients.

“We are so overwhelmed with excitement and happiness,” Levine said. “I just keep saying it’s a miracle. It’s such a victory. It’s like God told us he wants us to do this.”