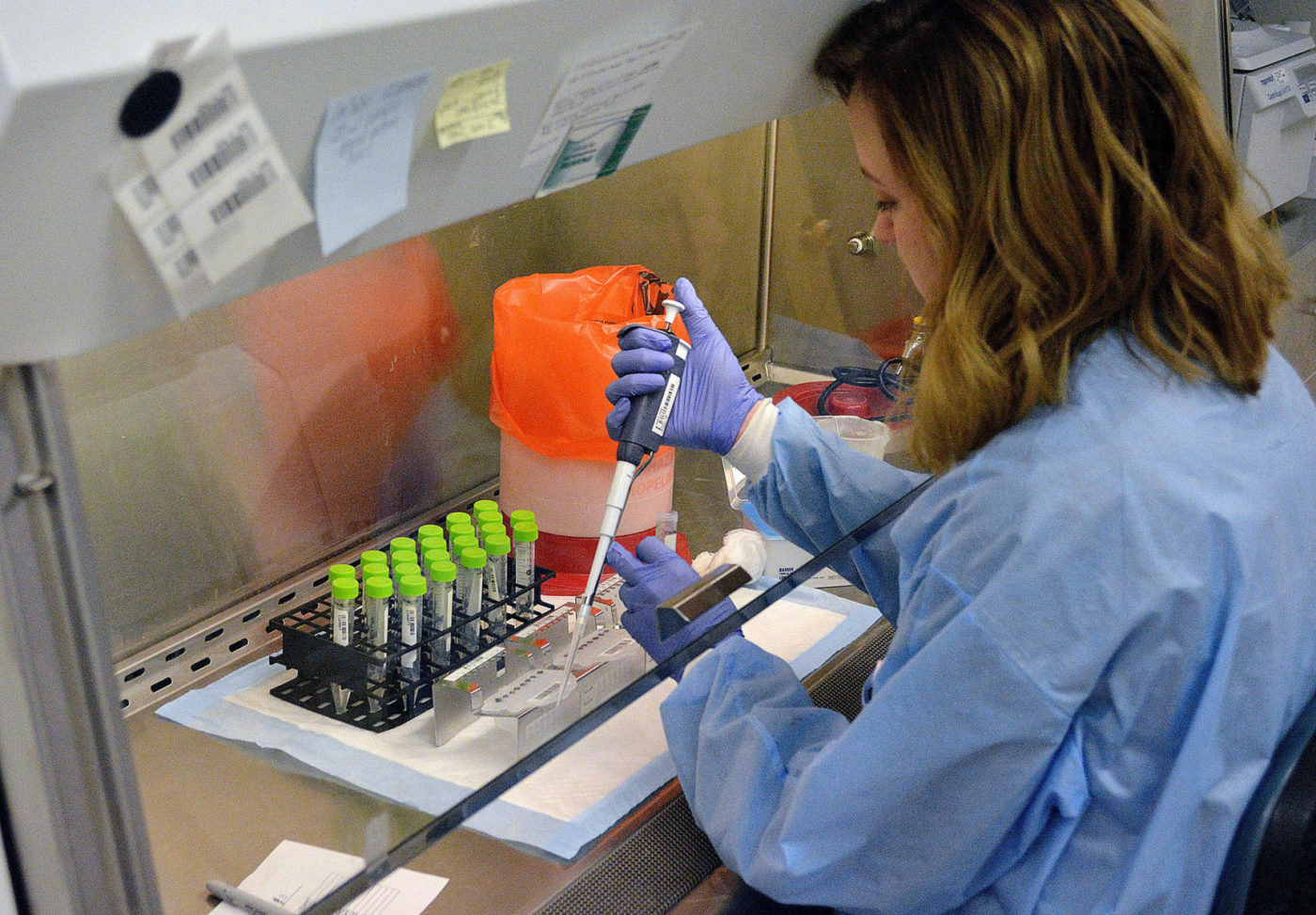 As Gov. Steve Bullock moves to roll back emergency measures enacted to slow the COVID-19 pandemic, he has said he’ll take a data-driven approach to reopening Montana’s economy  while minimizing the risk of a second-surge outbreak.

State officials are keeping a close eye on the number of laboratory-confirmed cases. However, they aren’t tracking the number of Montanans who’ve been tested in each county, a metric national experts say is important to fully understand how the outbreak is playing out in different parts of the state.

Testing has been in short supply across the country. Counting methods vary, but the U.S. has tested 4.6 million people, or roughly 1.4 percent of the population, according to data from Johns Hopkins University & Medicine’s Coronavirus Research Center. Montana has tested 11,875, or 1.1% of its population.

While some local health departments can provide figures on the number of tests conducted in their jurisdictions, those numbers are often imperfect.

Since there’s currently no vaccine for the disease, public health experts say testing for COVID-19 doesn’t change how patients are treated. Testing does show how much of a presence the virus has in specific locations, which is a primary factor employed by elected officials, health experts and the public in determining how quickly to scale back social distancing and closure measures.

Jon Ebelt, a spokesperson for the state Department of Public Health and Human Services, said the state has what it needs to understand how the virus is spreading in Montana communities.

“We receive every piece of data we need from counties,” Ebelt said.

Bullock unveiled a plan Wednesday to reopen Montana’s economy, citing the state’s comparatively low COVID-19 case counts and apparent success at flattening the outbreak’s curve. The plan involves three phases of easing social distancing directives, and lets local governments adopt more stringent rules at their discretion. As he monitors the reopening, Bullock said, he is considering the number of confirmed cases, including how many are new each week, as well as hospitalization numbers, testing capacity and supplies of protective equipment.

“Decisions are going to be driven by the ongoing data and the science, not politics,” Bullock said at an April 14 press briefing.

However, health experts say county-level testing counts are valuable data. Aaron Katz, a health policy professor with the University of Washington School of Public Health, said without knowing how many people have been tested in each county, officials can’t see shortfalls in testing from one place to the next. Without that, it’s difficult to chart the state’s rate of infection over time.In an effort to assess what information is available on local COVID-19 testing, journalists with Montana Public Radio, Yellowstone Public Radio, the Bozeman Daily Chronicle, Lee Newspapers and Montana Free Press teamed up to ask the local health officials serving each of Montana’s 56 counties how many of their residents had been tested for COVID-19 as of April 8.After two weeks of follow-up calls and emails, we heard back from 53 counties, with 43 providing a figure for how many tests had been conducted on their residents either as of April 8 or by the date they responded. The responses indicate there has been wide variation in how many COVID-19 tests have been conducted in different parts of Montana, from upwards of 1,000 tests in some urban counties to fewer than 10 — or none at all — in some rural counties.

While most local health departments provided figures on the number of tests conducted on their residents, many cautioned that their figures were imprecise.

As such, the data available on how many COVID-19 tests had been conducted — and local public health officials’ confidence in the numbers they provided  — varied wildly from one county to the next.

Health officials in many rural counties said the testing counts they have available omit people who’ve been tested in a different county. The rural public health officials we spoke with said they’re typically informed when those patients test positive for the disease. But they said they haven’t been consistently notified when tests conducted elsewhere come back negative.

“We’re 60 miles from Great Falls. People go to Great Falls for their health care,” said Teton County Public Health Director Melissa Moyer. As a result, she said, while her numbers tallied 31 tests in Teton County as of April 15, she was confident that figure underestimates how many of her residents had been tested.

Being informed about pending or negative tests, Moyer said, can help her connect with her residents to ensure they stay home while their tests are pending and verify that they’re informed of their results.

“We are still determining the best system for sharing negative results with appropriate jurisdictions, given the regional method of care delivery,” the department wrote.

Testing done by private labs outside the purview of the state health department also complicates matters. While the state has reported a running test count tally on its online COVID-19 dashboard — 11,875 as of April 23 — that figure includes only tests conducted at the state laboratory in Helena. The state health department said April 21 it was aware of another 2,500 tests conducted by 18 private labs. Positive cases from those tests are included in the state count.

At the local level, many counties don’t know how many of their residents have been tested through private labs.

With the state lab in Helena conducting hundreds of COVID-19 tests a day, thousands of Montanans have been tested since the data on which this story is based was compiled. It is not known how that testing has been distributed across the state.

“In my jurisdiction, I feel pretty confident that anyone with symptoms is getting tested,” said Moyer, the Teton County health director.

“Just because things are working pretty well now, does not mean it would continue if our epidemic increases and we need to run more tests than we are currently running,” said Gallatin County Health Officer Matt Kelley.

Some Montanans say they’ve been denied COVID-19 testing despite describing symptoms that match those most commonly associated with the disease.

Official testing guidance from the U.S. Centers for Disease Control delegates COVID-19 testing decisions to front-line health care providers. But that guidance changed repeatedly in March as testing capacity ramped up across the nation.

The current guidance, last updated March 24, asks clinicians to “use their judgment to determine if a patient has signs and symptoms compatible with COVID-19.” The CDC lists fever, cough and difficulty breathing as COVID-19 symptoms.

Bullock has said in recent weeks that any Montanan with COVID-19 symptoms should seek testing from a health care provider. As recently as April 15, though, state health officials have cautioned providers to be “judicious” with testing orders to avoid bogging down the state lab.

Karen Swigart, 43, of Miles City, said in an interview that she sought a COVID-19 test there in late March after developing a headache, fever, aches and a dry cough so severe her lips turned blue. She called the local hospital, she said, but was told “that to be tested I would need to be sick enough to be admitted to the hospital.” She said she was declined a test without being asked for her full name.

“I don’t believe they should be promoting that they have zero positive cases in our county. It’s just that they haven’t been testing people,” Swigart said.Swigart, who has recovered, said she’s frustrated that Custer County continues to report no cases of COVID-19. She said she also wishes that county officials, who have been posting the county’s case count and testing numbers on the county’s emergency services Facebook page, would additionally track and report how many people have been denied testing.

Butte-Silver Bow Health Officer Karen Sullivan said she tracks both how much testing has been conducted in her jurisdiction on a per-capita basis and also what percentage of tests have come back positive to assess whether her county’s metrics are in line with the state as a whole.

“At this point, hospitalizations do not indicate that the virus is spreading unnoticed,” he said.

ullock, a Democrat who is running for U.S. Senate, has been under pressure from state Republicans to loosen public health restrictions. During a telephone town hall following his announcement about lifting some restrictions, he received push-back from Montanans who think it’s too soon.“I’m afraid with the relaxing of these policies for the state of Montana, [it’s] going to cause a lot more sickness,” said one caller from Laurel.

The article was published at As Montana prepares to reopen, state lacks local COVID-19 testing data