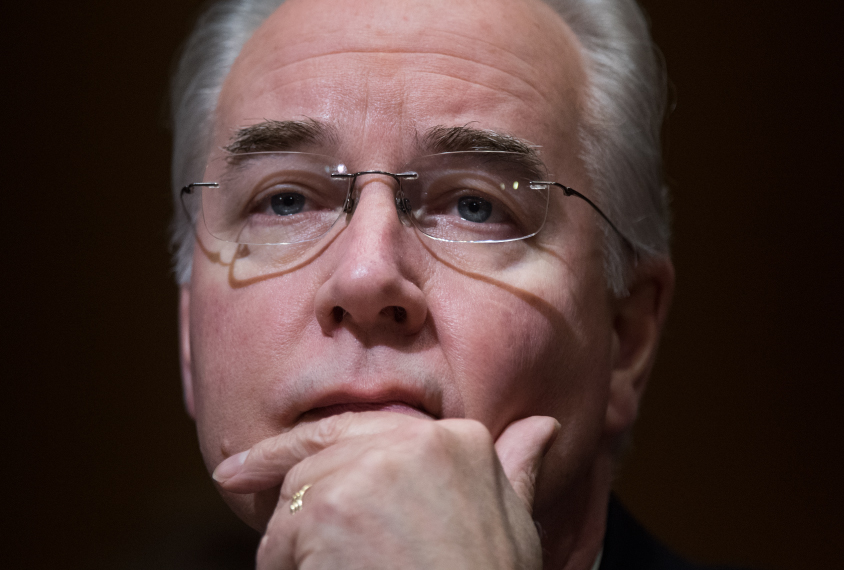 After a bruising confirmation process, the U.S. Senate confirmed Representative Tom Price, R-Ga., to head up the Department of Health and Human Services (HHS), by a 52-to-47 vote. As secretary, Price will have significant authority to rewrite the rules for the Affordable Care Act, some of which are reportedly nearly ready to be issued.

But there is much more now within Price’s purview as head of an agency with a budget of more than $1 trillion for the current fiscal year. He can interpret laws in different ways than his predecessors and rewrite regulations and guidance, which is how many important policies are actually carried out.

“Virtually everything people do every day is impacted by the way the Department of Health and Human Services is run,” says Matt Myers, president of the Campaign for Tobacco-Free Kids. HHS responsibilities include food and drug safety, biomedical research, disease prevention and control, and oversight over everything from medical laboratories to nursing homes.

Price, a Georgia physician who opposes the Affordable Care Act, abortion and funding for Planned Parenthood, among other things, could have a rapid impact without even a presidential order or an act of Congress.

Some advocates are excited by that possibility. “With Dr. Price taking the helm of American health policy, doctors and patients alike have sound reasons to hope for a welcome and long-overdue change,” Robert Moffit, senior fellow at the conservative Heritage Foundation, said in a statement when Price’s nomination was announced.

Others are less enthusiastic. Asked about what policies Price might enact, Topher Spiro of the liberal Center for American Progress said at that time, “I don’t know if I want to brainstorm bad ideas for him to do.”

Here are five actions the new HHS secretary might take, according to advocates on both sides, that would disrupt health policies currently in force:

Under the Affordable Care Act, most insurance plans must provide women with any form of contraception approved by the U.S. Food and Drug Administration at no additional cost. This has been particularly controversial in regards to religious employers who object to artificial contraception, leading to alterations in the rules, and resulting in a two separate Supreme Court rulings, one about private firms’ rights to make religious objections, and one about nonprofit religious hospitals and schools.

As secretary, Price would have two main options. He could expand the ‘accommodation’ that already exempts some houses of worship from the requirement to any employer with a religious objection. Or, because the specific inclusion of birth control came via a regulation rather than the law itself, he could simply eliminate no-copay birth control coverage from the benefits insurance plans must offer. (This assumes continuing existence of the health law, at least for the short term.)

The health law created an agency within Medicare, called The Center for Medicare and Medicaid Innovation, that was tasked with exploring new ways to pay doctors and hospitals that would reduce costs while maintaining quality. The HHS secretary has the authority to force doctors and hospitals to participate in the experiments and new payment models. Some have proven unpopular with physician and hospital groups, in particular the idea of paying providers so-called bundled payments for packages of care, rather than allowing them to bill item-by-item; one such package covers hip and knee replacements, from the time of surgery through post-surgical rehabilitation. Price, as a former orthopedic surgeon himself, would likely act to scale back, delay or cancel that project, as he “has been a critic in the past,” says Dan Mendelson, president of Avalere Health, a Washington, D.C.-based consulting firm.

Republicans have been agitating to separate Planned Parenthood from its federal funding for decades. Congress would have to change Medicaid law to permanently defund the women’s health group, which also performs abortions (with non-federal funds) at many of its sites. But an HHS secretary has many tools at his disposal to make life miserable for the organization.

For example, during the Reagan and George H.W. Bush administrations, rules were put in place, and eventually upheld by the Supreme Court, that would have banned staff in federally funded family planning clinics from counseling or referring for abortion women with unintended pregnancies. The subsequent Clinton administration repealed the rules, but they could make a comeback under the new secretary’s leadership.

Price could also throw the weight of the department into a probe into Planned Parenthood’s ties to firms allegedly selling fetal tissue for profit, which has also been investigated by a House committee.

After years of discord, Congress finally agreed to give the Food and Drug Administration (limited) authority to regulate tobacco products in 2009. “The core authority is statutory,” says Matt Myers of the Campaign for Tobacco-Free Kids, who advocated for the law. That means Congress would have to act to eliminate many of its changes. But a secretary who opposes the law (Price voted against it at the time) could weaken enforcement, says Myers. Or he could rewrite and water down some rules, including recent ones affecting cigars and e-cigarettes.

“The secretary has very broad discretionary authority not to vigorously enforce or implement the statute in an aggressive manner,” Myers says.

At the very end of the George W. Bush administration, HHS issued rules intended to clarify that health care professionals did not have to participate in performing abortions, sterilizations or other procedures that violated a “religious belief or moral conviction.”

Opponents of the rules complained, however, that they were so vague and sweeping that they could apply not just to opponents of abortion, but also to those who don’t want to provide birth control to unmarried women, or HIV treatment to homosexuals.

The Obama administration revised the rules dramatically, much to the continuing consternation of conservatives. They were among the few health-related items included in the health section of Donald Trump’s website before he was inaugurated and the page was taken down. “The Administration will act to protect individual conscience in health care,” it said. Many expect the rules to be reinstated in their original form.