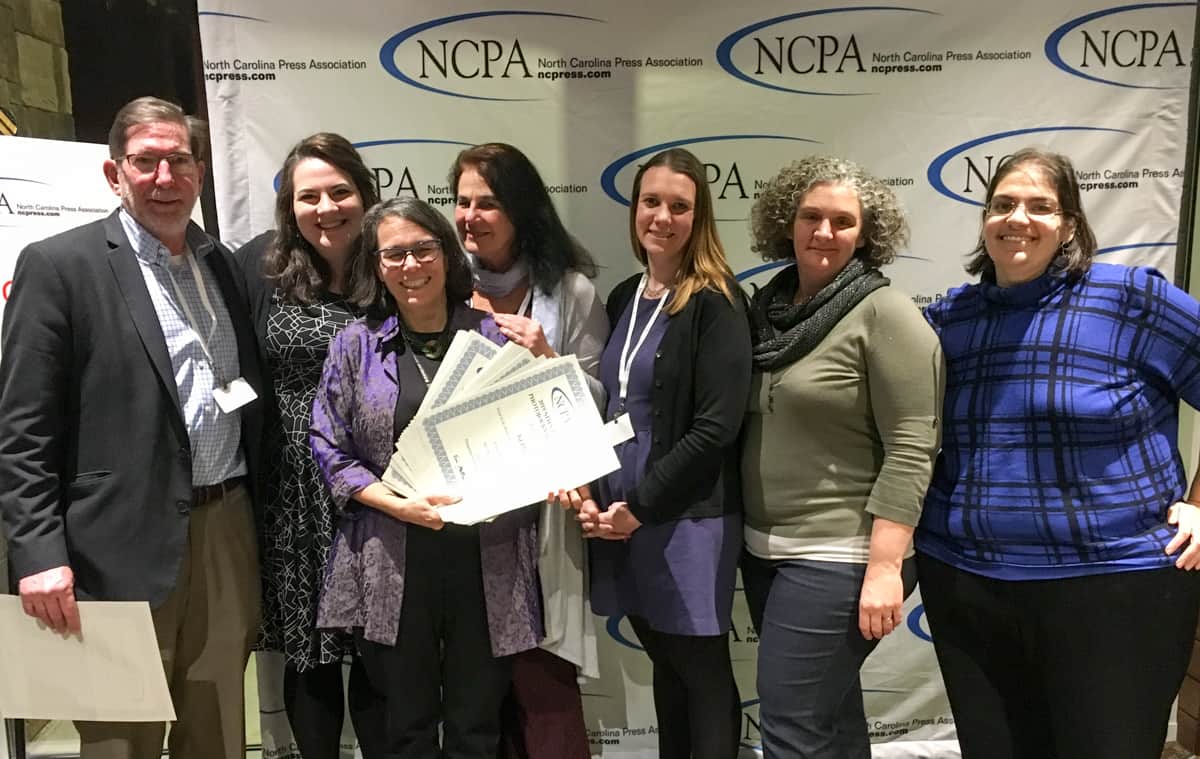 “I’m so proud and honored to lead this team of super-smart, super-dedicated reporters,” said editor and website founder Rose Hoban. “We have decades of experience and knowledge on this team, and it shows in their insightful reporting and knock-em-dead writing.”

Barnes won in the category “Beat News Reporting” for a series of stories on aging sewer treatment plants across North Carolina. Barnes found that crumbling sewer lines have led to thousands of sanitary sewer overflows, dumping millions of gallons of untreated waste into our rivers, lakes and streams. The state estimates that it would cost $11 billion to fix the problems; $26 billion if water treatment plants are also rebuilt.

A judge for the category noted: “Great in-depth reporting on an issue that affects every single NC citizen. Obvious here that the writer took the time to make the series impactful to every reader.”

Duong won first place for best opening paragraphs. Two other staff members won awards in the same category: second place for Anne Blythe and third for Barnes, making it a sweep of that division for online publications.

Generations beat reporter Thomas Goldsmith won second- and third-place awards in the “Enterprise News Reporting” category. Goldsmith’s stories exposed, among other things, that Medicaid recipients in long-term care in North Carolina receive only $30 in personal spending money each month, a figure that has remained the same for years. Goldsmith also reported that more than $31 million in fines against nursing homes has sat in a fund that is barely used. The fund is supposed to help improve the conditions of long-term care residents.

Barnes won second place in the “Investigative Reporting” category for a  series of stories on “forever chemicals” in our state’s streams and rivers. The stories led Pittsboro officials to warn residents of high levels of potentially cancer-causing chemicals called PFAS in their drinking water.

Hoban, along with Knopf and Duong, won second place in the “Breaking News Coverage” category by scrambling to piece together a story after President Trump said in his State of the Union address that he would eliminate the HIV epidemic in the United States. One of the target areas for extra resources and funding is Charlotte/Mecklenburg County, which has the highest HIV incidence in the state and one of the highest rates of infection in the South.

Hoban also won a third-place award in the same category for a story about an emotional hearing before the state General Assembly on the “abortion survivors” bill.

A grant from the Solutions Journalism Network helped enable Knopf to travel to Europe to report on innovative techniques other countries are using to deal with the opioid epidemic. From the trip, Knopf won a second-place award for best headlines and two third-place awards for best video and best photography feature.

In the anonymous notes on Knopf’s headlines nod, the judge wrote, “Making the connection: From what, to who to why to how to when and where. I want to read this series.”

Executive Director and editor Rose Hoban founded NC Health News in 2011 and launched in 2012 as an online news organization to fill in the critical reporting gap in the complicated topic of health care throughout North Carolina.

The site has a “virtual newsroom” with regular reporters and freelancers scattered across the state from Charlotte to Fayetteville, and a board that also is geographically dispersed. NC Health News is an independent 501(c)(3) not-for-profit, nonpartisan news organization dedicated to covering health care in North Carolina, employing the highest journalistic standards of fairness, accuracy and extensive research.