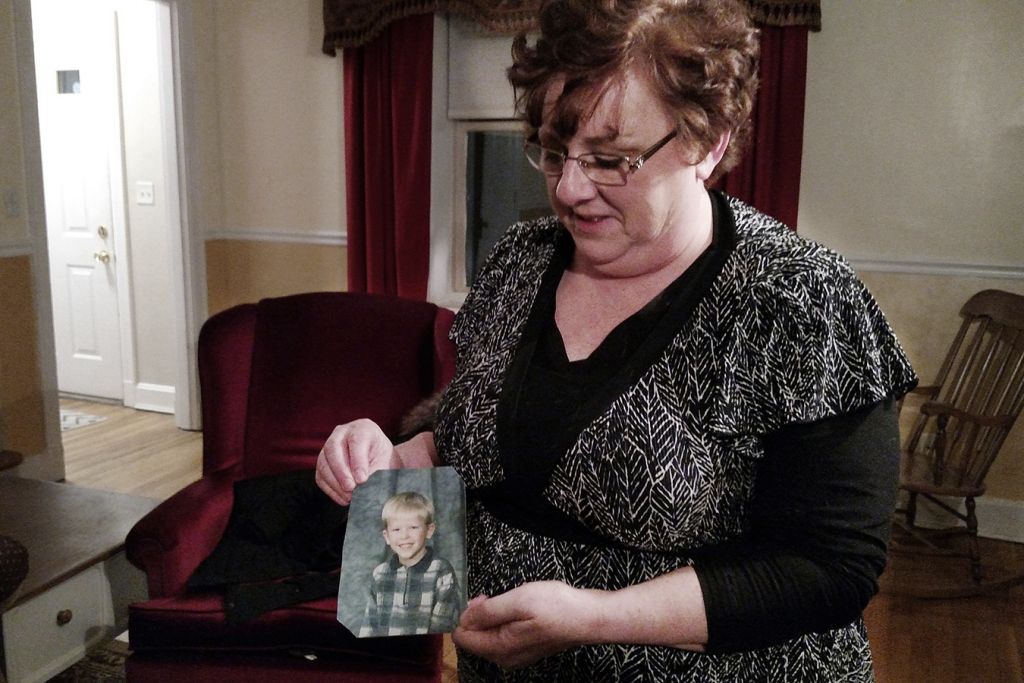 When Toni and Jim Hoy adopted their son Daniel through the foster-care system, he was an affectionate toddler. They did not plan to give him back to the state of Illinois, ever.

Toni recalls times Daniel would reach over, put his hands on her face and squish her cheeks. “And he would go, ‘You pretty, Mom,’” Toni says. “Oh my gosh, he just melted my heart when he would say these very loving, endearing things to me.”

But as Daniel grew older, he changed. He began to show signs of serious mental illness that eventually manifested in violent outbursts and nearly a dozen psychiatric hospitalizations, starting at age 10. Doctors said he needed intensive, specialized care away from home — institutional services that cost at least $100,000 a year.

The family had private insurance through Jim’s job, and Daniel also had Medicaid coverage because he was adopted. But neither insurance would pay for that treatment. Exhausted and desperate, the Hoys decided to relinquish custody to the state. If they sent Daniel back into the foster-care system, the child-welfare agency would be obligated to pay for the services he needed.

“To this day, it’s the most gut-wrenching thing I’ve ever had to do in my life,” Jim says. He went to the hospital and told Daniel, then 12, that they were legally abandoning him so child welfare could take over. “I was crying terribly. But it was the only way we figured we could keep the family safe.”

Two-thirds of states don’t keep track of how many families give up custody to help a child get mental-health services in the United States. But a study by the Government Accountability Office found that, back in 2001, families in 19 states relinquished nearly 13,000 children.

Today in Illinois, state records show that dozens of children enter state custody this way each year, despite a 2015 state law aimed at preventing it. And new data collected by the University of Maryland for the federal government finds that Illinois is not alone in failing to address this issue.

Mental-health advocates say the problem is one of ‘too little, too late.’ Even when states try to help children get access to treatment without a custody transfer, the efforts come too late in the progression of the children’s illnesses.

The advocates blame decades of inadequate funding for in-home and community-based services across the U.S. — a lack of funding that has chipped away at the mental-health system. Without that early intervention, children deteriorate to the point of being needlessly hospitalized and requiring costly residential care.

Until that underlying problem is addressed, child advocates say, the problem of families trading custody for treatment will never truly be solved.

Daniel grew up as the youngest of four children in Ingleside, a village north of Chicago. As a baby, he had been severely neglected in his birth family — starved and left for dead. The early trauma Daniel experienced very likely affected his brain development, doctors say.

Toni home-schooled her children until she had to return to work full time in 2005. She says Daniel, who was 10, just fell apart.

“After six weeks of being in a public-school classroom — something kids do every day — he couldn’t emotionally handle it and had his first hospitalization,” Toni says.

“He held knives to people’s throats,” Toni says. “He tried putting his fingers and his tongue in the light sockets. He broke almost every door in the house.”

In the car, there were times he’d reach over and grab the wheel while Toni was driving, to try to force the car into oncoming traffic. Other times, he would lash out at his siblings.

Despite Toni and Jim’s efforts to help their son with therapy and medication, the violence escalated, and Daniel was repeatedly hospitalized.

Although his doctors and therapists said he needed residential treatment, which would run at least $100,000 a year, both the family’s private health insurance and Daniel’s secondary Medicaid coverage denied coverage.

So the Hoys applied for a state grant meant for children with severe emotional disorders. They also asked for help from Daniel’s school district, which is supposed to cover a portion of the costs when students need long-term, off-site care. They were denied both.

“We were told we had to pay out of pocket for it,” Toni says.

Then, one night Daniel picked up his brother Chip, threw him down the stairs and punched him over and over before their father pulled the boys apart.

Daniel went back to the hospital for the 11th time in two years. That’s when the Illinois Department of Children and Family Services gave the Hoys an ultimatum.

“[They] basically said, ‘If you bring him home, we’re going to charge you with child endangerment for failure to protect your other kids,’” Toni says. “‘And if you leave him at the hospital, we’ll charge you with neglect.’”

“If any of our other kids got hurt once we brought him home, they would take the other kids,” Jim says. “They put our backs against the wall, and they didn’t give us any options.” So the couple left Daniel at the hospital.

Once the state’s child-welfare agency steps in to take custody, the agency will place the child in residential treatment and pay for it, says Robert Farley Jr., a lawyer in Naperville, Illinois, another Chicago suburb.

“So you get residential services, but then you’ve given up custody of your child,” Farley says. “Which is, you know, barbaric. You have to give up your child to get something necessary.”

Taking it to the courts:

The Hoys were investigated by the Department of Children and Family Services and charged with neglect. They appealed in court, and the charge was later amended to a ‘no-fault dependency,’ meaning the child entered state custody at no fault of the parents.

They didn’t know where Daniel was for several weeks, until he phoned from the group home where he had been placed to tell them he was okay.

Losing custody meant Toni and Jim could visit Daniel and maintain contact with him, but they could not make decisions regarding his care.

Over the next three years, Daniel lived at three residential treatment centers. One was five hours away by car. His parents visited as often as they could.

Toni spent months reading up on federal Medicaid law, and she learned the state-federal health insurance program is supposed to cover all medically necessary treatments for eligible children.

The Hoys hired a lawyer and, two years after giving Daniel up, they sued the state in 2010.

Six months later, they settled out of court and regained custody of Daniel, who was 15 by then. They also got the money to pay for Daniel’s care on their own.

Around the same time, Farley, the attorney, decided to take on the issue on behalf of all Medicaid-eligible children in the state. He filed a class-action lawsuit, claiming Illinois illegally withheld services from children with severe mental-health disorders.

“There [are] great federal laws,” he says. “But someone’s not out there enforcing them.”

In his lawsuit, Farley cited the state’s own data, showing that 18,000 children in Illinois have a severe emotional or behavioral condition, yet only about 200 receive intensive mental-health treatment.

As part of a settlement, a federal judge ordered Illinois Medicaid officials to completely overhaul the state system so that children get home- and community-based treatment in the early stages of their illness.

The deadline for the state to roll out those changes is this month.

While these legal battles were taking place, Illinois lawmakers began their own work to ensure that parents no longer have to relinquish custody to get their children the help they need.

The Custody Relinquishment Prevention Act, which became law in 2015, ordered six state agencies that interact with children and families to intervene when a family is considering giving up custody to get access to services.

“I think the question is: Shouldn’t government be stepping in and doing their job? And they’re not,” says Democratic state representative Sara Feigenholtz. “We just want them to do their job.”

“If law could fix problems, we’d have a different world,” she says.

In some places, waitlists for residential treatment beds for children in crisis can be months long.

But even when beds are available, Walker says, some facilities are simply unwilling or unable to take a child who has a severe mental-health condition or a co-occurring medical condition.

Out of desperation, some parents will give up custody in the hope of getting their child to the top of the waiting list. But that doesn’t necessarily solve the problem.

As ProPublica Illinois reports, many foster children languish for months in psychiatric wards that are ill-equipped to provide long-term care, because the state is unable to place them in an appropriate therapeutic setting. Walker’s agency is being sued for allegedly forcing children to “remain in locked psychiatric wards, causing immense harm,” for weeks or months after they’ve been cleared for discharge.

Neil Skene, spokesman for Illinois’ child-welfare agency, says there are more options for families like the Hoys today than there were a decade ago. That includes a crisis-stabilization program launched in 2017 that helps families get access to services.

When the child-welfare agency is blamed for this problem, Skene says, it’s like when a pitcher comes in at the end of a losing game to save the day and gets tagged with the loss.

Some mental-health advocates agree it’s not fair to blame the state’s child-welfare agency for a problem that stems from a chronically underfunded mental-health system.

Heather O’Donnell, a mental-health advocate who works for Thresholds, a behavioral-health treatment provider in Chicago, blames years of inadequate funding in Illinois and across the U.S.

Early-intervention services are either not available or not accessible because insurance companies deny coverage.

“If these kids had leukemia or diabetes, they would’ve gotten help long, long before,” O’Donnell says. “It’s because they have a mental-health condition that causes their behavior to be challenging and erratic. And as a society, we sweep these conditions under the rug until there’s a crisis. We just wait for tragedy.”

“What Illinois needs to put into place is a system that helps these families early on, so that these kids never get hospitalized,” O’Donnell says.

Beth Stroul, who has been studying the problem of custody relinquishment for decades, agrees. She is the lead researcher on a new study — commissioned by the federal government and carried out by the University of Maryland — that explores why the problem persists.

Stroul says other states, including Georgia and New Jersey, have passed laws and stepped up efforts to help children get treatment while in parental custody.

“But those strategies, in and of themselves, are not sufficient unless there are home- and community-based services available that provide the supports and treatment needed to keep children and families safe in the community,” Stroul says.

Daniel Hoy is now 24 and has been out of residential treatment — and stable — for six years.

He says treatment was tough, and he would not have gotten better without his parents’ love and support. “It was never a question in my mind that my parents would always be there for me,” he says. “Sometimes it’s so hard to do it for yourself. It almost helps to know that I’m doing it for myself, but I’m also doing it for my family and for our relationship.”

Daniel now works nights for a shipping company and lives with his girlfriend and their toddler daughter in central Illinois, not far from his parents.

“I just love having a relationship with him,” Jim says. “I feel so privileged that [when] he’s having a bad day, he comes over and talks to us about it.”

Toni says, looking back, it’s shameful that families get torn apart by a system that’s supposed to be supportive.

She is grateful they made it through intact. Other families that have gone through this same thing, she says, have lost touch with their child forever. “Kids do need services,” Toni says. “But they also need the support of their families.”