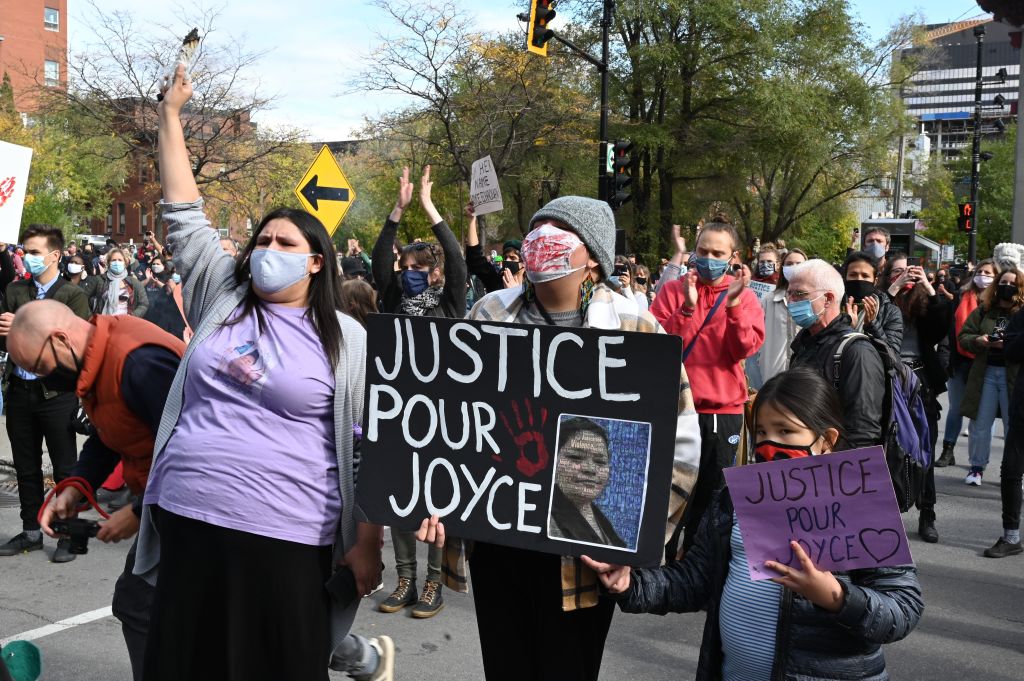 Canadians in the fall of 2020 sit uncomfortably in the grip of an unprecedented health crisis while a resounding cry to address systemic racism echoes throughout the globe.

At the same time that our health system and the economy are reeling from the extended impact of both an opioid crisis and the COVID-19 pandemic, millions of Canadians have also experienced a summer marked by popular uprisings against violence inscribed on Black, brown and Indigenous bodies.

At the intersection of these generation-defining emergencies we find a failure of formal structures of governance to model innovation, reflected in the inability of our elected leaders in Canada to do much more than express empathy and call for investigation.

In this maelstrom, the story of Joyce Echaquan, an Atikamekw woman and mother of seven, who died after being subjected to horrendous racism in a hospital in Joliette, Que., emerges as a painful reminder that our approach to care in Canada is not good enough.

The visceral reaction of the public to the circumstances of Echaquan’s death is not surprising – yet another Indigenous person seeking care has been met with indifference by health providers. Indeed, years of an unbroken narrative by Indigenous and racialized peoples that there exists two-tiered justice and health systems in this country is being confirmed through the phone cameras of brave citizens, much like it was with the murder of American George Floyd.

And yet, notwithstanding those moments of clear insight, what we are experiencing is proof, in real time, of the dismal theatre of oppression and deprivation that Indigenous Peoples face in clinical settings in Canada – the very places where we, at our most vulnerable, seek solace and wellness.

We ought not to waste time pretending, as Quebec Premier François Legault has dishearteningly suggested, that this is a one-off incident of a few bad apples in an otherwise fair and functional system. Nor should we waste time debating that what we saw through Echaquan’s phone was anything other than a cascading rush of systemic failures, ineffective laws, negligence, culturally insensitive structures, and government inertia over the plight of its Indigenous peoples.

But what happens when we add to Echaquan’s story, the story of Chantel Moore, the 26-year-old Tla-o-qui-aht mother of one, who was fatally shot in June 2020 by a police officer on a wellness check in Edmundston, NB? Or the story of Hugh Papik, the Aklavik elder who died in 2016 after his stroke was dismissed as drunkenness at both the elders’ home where he lived in the Northwest Territories and at the nearby Aklavik Health Centre? What might have been the result without the delay in getting him ultimately to a hospital in Yellowknife? Or the BC hospital where in the midst of the pandemic, it is alleged, emergency-room staff played a game where they guessed the blood alcohol levels of their Indigenous patients?

That there is a systemic problem to be addressed is simply settled truth. What remains in contention is the merit of the solutions our governments proffer.

We have been told the answer, many times. The Truth and Reconciliation Commission’s Call to Action 22 reads:

There is no question that inquests – such as the one now in place for Echaquan – have, since the Royal Commission on Aboriginal Peoples in 1996, been a repository of brave and painful first-hand stories, a catalogue of settler-colonial encounters that resonate to the present, and within them, earnest legacies of hope. But they also have the capacity to obscure the underlying truths and structures that weave together the final quilt of discrimination and loss of life that we see played out on our screens.

We know, without inquest, that in her dying moments Echaquan faced references to her intelligence and sexualized insults – ones that match the historical pattern of sexual stereotypes and psychosocial discrimination that Indigenous women face in Canada. We also know from the many roads already travelled how this pattern insidiously impacts on the access Indigenous Peoples ought to have to health, wellness and related services. Indeed, evidence of bias, discrimination and stereotyping in Canadian health-care institutions and the impact of racism on the health of racialized groups in Canada are well documented.

Our argument here is simple: the structures of indifference that underlie Echaquan’s death demand more than a call for yet another investigation into that already settled truth, the systemic racism and endemic colonialism faced by Indigenous peoples in Canada today.

We ask instead, drawing on the TRC’s clear articulation of the responsibilities that rest on each and every one of us, what could inclusion and decolonization look like in hospitals? What could access to equitable, culturally safe, trauma-informed, health-care mean? What transformations are possible if we look at health through the lens of Indigenous laws?

All vestiges of colonialism must be cast aside from health care.

All vestiges of colonialism must be cast aside from health care. That means that Canada must pay attention to its legacies of systemic discrimination in health care and fully implement its commitments like Jordan’s Principle, so that young Indigenous patients do not bear the brunt of federal-provincial disagreements over who should pay for their care. It also would mean providing urban Indigenous and Indigenous peoples on reserve health-care infrastructures that reflect the level and quality of services available to non-Indigenous Canadians everywhere else.

Transformational change also demands recognition of and adherence to Indigenous legal orders and protocols on issues of healing and issues of harm. Work with institutes, like the Indigenous Law Research Unit at the University of Victoria, dedicated to the recovery and renaissance of Indigenous laws, is one such path.

The kind of reconciliation contemplated by the TRC places responsibilities on all of us to bring intersocietal safety into reality. Regardless of the policy options we may individually and collectively espouse, reform should most certainly involve creating trauma-informed clinical settings where all Canadians – including Black, Indigenous, and peoples of colour – are able to access care from health-care providers who are respectful, anti-discriminatory and non-judgmental.

As several scholars including Sheryl Nestel and authors Billie Allan and Janet Smylie have reiterated, discrimination remains a barrier with intersecting psychological and social dimensions. All Canadians will benefit when our systems are accessible and not overwhelmed by expenditure on critical care resulting from long unaddressed health problems.

No person in Canada should ever face the racism that Joyce Echaquan did, let alone in their final moments, while seeking care.

Many Indigenous women, scholars, youth, community leaders, artists and aggrieved families have been telling stories about their health and health-care experiences before inquiries for decades. Just like we saw in the #BlackLivesMatter movement in the summer of 2020, these same people and those who came after them have also round-danced, marched, built lodges, hung red dresses and taken up seats of power to model how dynamic substantive equality could be.

We already know the answers; they come from listening. Now is the time to put into action – with creativity and political intention – the urgent stories about health and wellness that are embedded in the Royal Commission on Aboriginal Peoples, the Truth and Reconciliation Commission of Canada, the National Inquiry into Murdered and Missing Indigenous Women and Girls, the Viens Report, and more. Paying attention to all the calls for justice, including those that advocate substantive equality for Indigenous peoples in Canada today, that will be #JusticeforJoyce.

This article was originally published on We don’t need an inquest for Joyce Echaquan. We need to build a culturally safe, trauma-informed health-care system that draws on Indigenous voices.