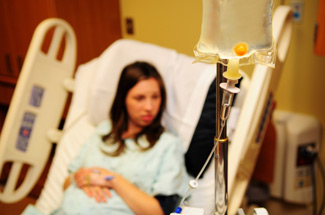 Women who have influenza, commonly known as the flu, while pregnant double their risk of having a child with autism, according to a large study published 12 November in Pediatrics. The results add to growing evidence of a connection between maternal infection and autism1.

The study is based on an analysis of nearly 100,000 Danish children. Children whose mothers had fevers of seven days or longer while pregnant are three times as likely as those in the general population to be diagnosed with autism, according to the analysis.

“The coverage of this study was a bit out of proportion since the theory really needs confirmation before we can conclude anything,” says Atladóttir, a physician and epidemiologist at the Regional Hospital of Randers in Denmark.

Atladóttir notes that the risk of having a child with autism remains small, even among women who are ill while pregnant. Overall, children in the study had a 0.4 percent chance of being diagnosed with autism. That risk increased to 0.9 percent for children whose mothers had the flu during pregnancy, and to 1.2 percent for those whose mothers had a fever lasting a week or longer.

“I don’t think mothers with influenza during pregnancy should worry too much,” Atladóttir says. “We can still say to any woman, ‘Even though you have influenza, there’s a 99 percent chance that your child will not have autism.’ ”

In addition to classic autism, researchers looked at the risk of autism spectrum disorders overall, which include the milder disorders of Asperger syndrome and pervasive developmental disorder-not otherwise specified. They found that flu during pregnancy does not increase risk of these disorders, but women who have a week-long fever have a 60 percent higher risk of having a child with one of these disorders.

Among the study’s major limitations is that it is based on women’s self-reports about whether they were sick during pregnancy.

“While maternal recall may be important, this never takes the place of absolute verification,” says S. Hossein Fatemi, professor of psychiatry at the University of Minnesota, who was not involved in the research. The study would have been stronger, Fatemi says, if researchers had instead taken blood samples and looked for evidence of infection.

Still, the Danish findings fit into the emerging picture of a link between maternal infection and autism risk, says Paul Patterson, professor of biology at the California Institute of Technology, who was not involved with the study. “It all adds up together,” he says.

Researchers have speculated for years that maternal infection may play a role in autism. For instance, epidemiologists have noted elevated rates of the condition among children born to women who contracted rubella during a 1964 outbreak2.

In recent years, scientists have begun exploring these links. In 2010, for example, Atladóttir and her colleagues found that women who had serious viral infections during the first trimester of pregnancy and those who had serious bacterial infections during the second trimester were more likely to give birth to children later diagnosed with autism than women who did not have these infections3.

In the new study, Atladóttir aimed to examine the specific types of infections and their potential connections to autism.

She and her colleagues analyzed data collected more than a decade ago as part of the mammoth Danish National Birth Cohort. This cohort is part of a long-term project designed to provide researchers with all sorts of information about pregnant women — including their diet, use of medicines and supplements, smoking and drinking habits and home environments — and their children’s health.

The project enrolled more than 100,000 pregnant women between 1996 and 2002. The researchers conducted telephone interviews with these women during and after their pregnancies. Among other questions, they asked the women about any infections and fevers they’d had, as well as whether they’d used any antibiotics. The researchers also tracked the health of 96,736 children born from these pregnancies.

Combing through the data, the researchers found no link between autism risk and most common infections, such as yeast infections, herpes or respiratory illnesses. However, they found that children whose mothers had the flu during pregnancy are twice as likely to be diagnosed with autism.

The researchers also found that women who used antibiotics during their pregnancy had a slightly increased chance of giving birth to a child later diagnosed with autism. “But it is barely significant,” Atladóttir says.

The study doesn’t prove that maternal flu raises autism risk in the child, or suggest a mechanism for the increased risk.

“For those two points you have to do animal studies,” Patterson says.

Accumulating evidence from animal studies suggests that it’s not necessarily the virus itself that affects the fetal brain, but the way the mother’s immune system responds to it.

When a woman contracts an infection, her body produces signaling compounds known as cytokines, which play a crucial role in fighting off disease.

Unfortunately, this ‘immune activation’ may haveside effectsfor the fetus. Cytokines,which can cross the placenta and the blood-brain barrier, seem capable of disrupting fetal brain development.

Indeed, research has shown that elevated levels of cytokines in the mother can alter the size of certain brain structures in her children4. In 2007, Patterson and his colleagues showed that injecting one particular cytokine — called interleukin-6 — into pregnant mice triggers changes in behavior and gene expression in the offspring5.

“Our hypothesis is that the mother’s immune response to infection involves cytokine induction,” Patterson says.

Atladóttir isn’t quite sure why flu, but not the other infections they studied, seems to increase autism risk. It’s possible that influenza triggers an especially strong immune response, she says. “[Influenza] is a harsh infection and you’re usually sick for a long time with high temperatures. The immune reaction in the body might be more intense.”

Lengthy fevers may also be an indication of a serious infection. Similarly, women who have more serious infections may be more likely to be prescribed antibiotics, accounting for the slight correlation between the women’s antibiotic use and autism risk in their children.