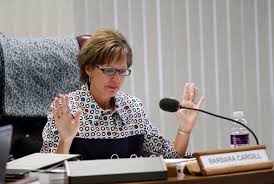 After a battle appeared to be brewing between the board’s left and right factions on contested language on evolution in one publisher’s biology lessons, members found a compromise: Let the education commissioner decide.

Earlier this morning, the Texas Freedom Network circulated a letter signed by five members of the biology curriculum panel — educators from around the state — challenging the report that came from the SBOE panel, saying they “do not agree that the claims listed are errors” and that they derive from “overtly creationist literature and arguments.”

And moderate members came prepared this morning to push back against the biology panel’s error findings in the evolution section of the Holt supplements, arguing that they were not supported by science.

“I want to make sure a group of lay people don’t try to rewrite science at the 11th hour,” said Ratliff, who defeated former chairman Don McLeroy in the 2010 Republican primary.

But after a 15-minute recess during which chairwoman Barbara Cargill urged her colleagues to “take a deep breath and collect ourselves,” the mood shifted and members decided they would approve the supplement if the publisher would reword the disputed language to Education Commissioner Robert Scott’s satisfaction.

Initially, David Bradley, a member of the board’s social conservative bloc, expressed displeasure at handing over the the board’s authority to the commissioner.

“We’re in Congress and we don’t want to take a vote on the debt ceiling,” he said, adding that they were “kick[ing] the can down the road.”

But after more discussion, Bradley, along with the entire board voted in favor of letting the commissioner take over the dispute.

Scott, who attended the meeting, told members he’d accept the responsibility. “My goal would be to try and find some common ground,” he said. “I cant promise either side that they will be happy.”

And what if the commissioner returns with wording that’s objectionable to the science community?

“Fortunately schools will have eight other choices,” Ratliff said.

Without much of its accustomed quarreling, the Texas State Board of Education moved toward approving a list of publishers for supplemental science materials today.

“Somebody might want their ticket refunded, because there wasn’t a fight,” exclaimed member David Bradley, R-Beaumont, at the end of the meeting.

Today and tomorrow the board is considering a list of recommended vendors for the supplemental materials that will update textbooks to the science standards it adopted in 2009, which include the requirement that students learn “all sides” of scientific theories like evolution and natural selection.

Watchdog groups cautioned that members could vote to go beyond the list previously OK’d by the Texas Education Agency and adopt materials from International Databases, a New Mexico-based creationist group. But as the meeting progressed it became clear that members had no interest in making that play and at its conclusion they unanimously rejected the publisher.

During public testimony, which newly appointed chairwoman Barbara Cargill limited to four hours, conservative members of the board repeatedly (and testily) asked witnesses to point out where creationism, intelligent design, God or Jesus were mentioned in any of the science standards or the text of the materials. Ken Mercer, R-San Antonio, said he would award $500 to anyone who could find any mention of “God or Jesus” in the standards.

Many were there to ask board members to keep the supplements as they were — and not require last minute changes before they’re finally approved tomorrow. Ronald Wetherington, a professor at Southern Methodist University who sat on the panel that reviewed the supplements, acknowledged that board members could find minor quibbles with the standards — but urged them not to “ask publishers and go back and weaken the science that is in there.”

“They are not golden but neither are they base metal,” he said.

Others, like Jonathan Saenz, a lawyer with the conservative Liberty Institute, urged the board to make changes to the supplements, because of “major concerns about information not being factual.” He also said that they fell short of meeting the “all sides” standard.

In the end, members sent three of the nine publishers on the TEA’s list of biology supplements home with the same modification.

Gail Lowe, R-Lampasas, objected to the materials’ use of embryo drawings from 19th century biologist and Darwin contemporary Ernst Haeckel, which are intended to show the similarities of vertebrate organisms. She said should be replaced with what she called more accurate photo representations, which Josh Rosneau, the policy director at the National Center for Science Education, said could artificially accentuate the differences between species.

The article was publishe at SBOE Gives OK to Science Supplements