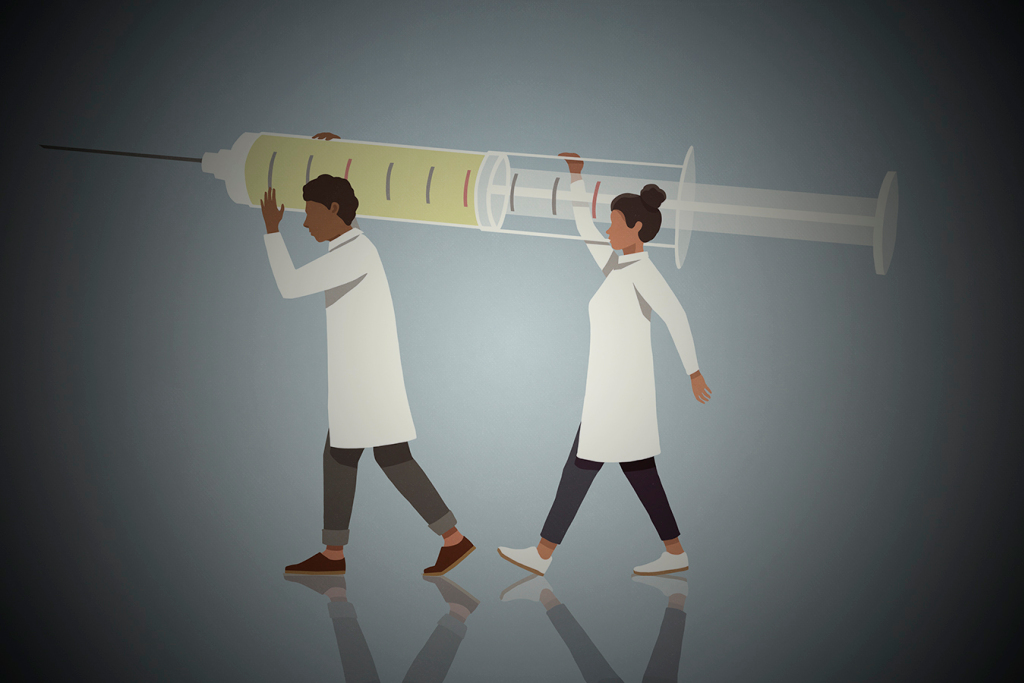 Most Americans have never heard of Dr. Richard Whitley, an expert in pediatric infectious diseases at the University of Alabama-Birmingham.

Yet as the coronavirus pandemic drags on and the public eagerly awaits a vaccine, he may well be among the most powerful people in the country.

Whitley leads a small, secret panel of experts tasked with reviewing crucial data on the safety and effectiveness of coronavirus vaccines that U.S. taxpayers have helped fund, including products from Moderna, AstraZeneca, Johnson & Johnson and others. The data and safety monitoring board — known as a DSMB — is supposed to make sure the medicine is safe and it works. It has the power to halt a clinical trial or fast-track it.

Shielding the identities of clinicians and statisticians on the board is meant to insulate them from pressure by the company sponsoring the trial, government officials or the public, according to multiple clinical trial experts who have served on such panels. That could be especially important in the pressure-cooker environment of COVID vaccine research, fueled by President Donald Trump’s promises to deliver a vaccine before Election Day.

As pharmaceutical companies work to produce one as quickly as possible, the board’s anonymity has stirred concerns that the cloak of secrecy could, paradoxically, allow undue influence. Whitley, for example, represents the specialized world these experts inhabit — a professor revered in academia who also is paid by the drug industry.

Any political pressure to rush pharmaceutical companies or lean on federal regulators to prematurely greenlight a vaccine would undermine a system put in place to ensure public safety. Calls are growing for companies and the government to be more open about who’s involved in reviewing the vaccine trials and whether board members have any conflicts of interest.

“We want to know they’re truly independent,” said Dr. Eric Topol, director of the Scripps Research Translational Institute and a specialist in clinical trials. “The lack of transparency is exasperating.”

Data and safety monitoring boards have existed for decades to vet new drugs and vaccines, acting as a backstop to help ensure unsafe products don’t make their way to the public. Typically, there’s one board for each product. This time, a joint DSMB with 10 to 15 experts will review unblinded data across trials for multiple coronavirus vaccines whose development the U.S. government has helped fund, according to five people involved in the Trump administration’s Operation Warp Speed or other coronavirus vaccine work. It is run through the National Institute of Allergy and Infectious Diseases at the National Institutes of Health and consists of outside scientists and statistical experts, not federal employees, NIH Director Francis Collins said on a call with reporters.

“Until they are convinced that there’s something there that looks promising, nothing is unblinded and sent to the FDA,” Collins said. “I doubt if there have been very many vaccine trials ever that have been subjected to this size and the rigor with which it’s being evaluated.”

The NIH safety board oversees trials in the U.S. from Moderna, Johnson & Johnson and AstraZeneca, U.S. officials and others involved in Operation Warp Speed said, but not Pfizer, which is fully funding its clinical trial work and established its own five-member safety panel. Pfizer has attested that it can conclusively determine by late October the effectiveness of its vaccine, being jointly developed with German company BioNTech. It secured a $1.95 billion purchase agreement with the Department of Health and Human Services for the first 100 million doses produced. The agreement gives HHS the option to buy an additional 500 million doses.

Moderna, Johnson & Johnson and AstraZeneca, which have either started or are aiming to soon begin large-scale trials in the U.S. involving thousands of patients, collectively have received more than $2 billion in government funds for vaccine development; billions more have been meted out under agreements similar to the HHS contract with Pfizer to buy millions of vaccine doses. Having one safety board oversee multiple trials could allow researchers to better understand the field of products and apply consistency across evaluations, clinical trial experts said in interviews.

One big advantage “could be more standardization,” said Dr. Walter Orenstein, associate director of the Emory Vaccine Center at Emory University and a former senior official at the Centers for Disease Control and Prevention. “They can look at that data and look at all the trials instead of just doing one trial.”

But it also means that one board has an outsize influence to dictate which coronavirus vaccines eventually succeed or come to a halt, all while most of their identities remain secret. The NIH declined to name them, saying they were “confidential” and could be identified only once a study was complete.

One exception to the mystery is Whitley, who was appointed as chair by Dr. Anthony Fauci, the nation’s top infectious disease official. Fauci said that following a “combination of input from us and from him and other colleagues, the people who had the greatest expertise in a variety of areas, including statistics, clinical trials, vaccinology, immunology, clinical work,” were selected for the panel.

Whitley’s role became public when his university announced it, an unusual move. He is a professor as well as a board member of Gilead Sciences, which recently signed a contract with Pfizer to manufacture remdesivir to treat COVID-19 patients. Whitley, who’s been on Gilead’s board since 2008, conducted research that led to remdesivir’s development.

In 2019, he was paid roughly $430,000 as a Gilead board member, according to documents filed with the Securities and Exchange Commission. That same year, he received more than $7,700 in payments from GlaxoSmithKline for consulting, food and travel, according to a federal database that tracks drug and device company payments to physicians.

GlaxoSmithKline and Sanofi are jointly developing a vaccine that’s received $2 billion from the U.S. government under Operation Warp Speed; however, Whitley, through a university spokesperson, said his DSMB has not seen any GlaxoSmithKline COVID protocols. The companies have yet to begin phase 3 trials. Although he chairs a separate GSK data and safety monitoring board for a pediatric vaccine, he was vetted and cleared by the NIH conflict-of-interest committee with its knowledge of his involvement, the spokesperson said.

“When handled responsibly, it is appropriate for physicians to collaborate with external entities,” said UAB spokesperson Beena Thannickal, saying the university works with physicians to ensure that industry engagement is appropriate. “It facilitates a critical exchange of knowledge and accelerates and advances clinical treatments and cures, and it fuels discovery.”

“I actually trust that process, and the fact that they asked Rich to do it makes me feel reassured because he’s so good,” said Dr. Jeanne Marrazzo, director of the University of Alabama-Birmingham’s division of infectious diseases.

Multiple scientists who have participated in data and safety monitoring boards maintain it’s important to keep the board anonymous to shield them against pressure or even for their safety. For example, when trials were conducted in San Francisco for HIV/AIDS research, the board was confidential to protect members from patients desperate for treatment, said Susan Ellenberg, a professor of biostatistics, medical ethics and health policy at the University of Pennsylvania who’s written extensively on the history of DSMBs.

If approached by a patient, it “would be very hard to tell you, ‘Oh I can’t help you.’ It’s an unreasonable burden,” said Ellenberg, who said she was involved in coronavirus-related safety boards but would not name them.

As part of a large-scale clinical trial, the DSMB and a statistician or team that prepares data for those individuals are generally the only ones who see unblinded data about the trial, making it clear who is getting what treatment. A firewall is set up between them and executives from the sponsoring company with financial interests in the trial. The companies sponsoring COVID vaccine trials are not part of any closed sessions during which unblinded data is reviewed. Those are limited to members of the DSMB, the NIAID executive secretary and the independent unblinded statistician who is presenting the data, a NIAID spokesperson said.

DSMB members or their family members should have no professional, proprietary or financial relationship with the sponsoring companies, and the NIAID DSMB executive secretary vetted all members for potential conflicts of interest, NIAID said in response to questions from KHN. Members are paid $200 per meeting.

“It’s generally done out of a sense of public service,” said Dr. Larry Corey of the Fred Hutchinson Cancer Research Center, who is working with NIH officials to oversee the U.S. coronavirus vaccine clinical trials. “You’re doing it because of your sense of altruism and obligation to knowing the important role it plays in clinical research and the important role it plays in preserving the scientific integrity of important trials.”

Moderna, AstraZeneca, Johnson & Johnson and Pfizer have each released protocols that include details on when their DSMBs would review unblinded information about trial participants, and at what points they could recommend pausing or stopping trials. The vaccine data and safety board organized by NIAID advises a broader oversight group consisting of the drug companies sponsoring the trial and representatives from NIAID and HHS’ Biomedical Advanced Research and Development Authority that reviews the DSMB recommendations. Ultimately, the drug company has final authority over whether to submit its data to the Food and Drug Administration.

Moderna and Johnson & Johnson are each aiming for their vaccines to have 60% efficacy, which means there would need to be 60% fewer COVID cases among vaccinated individuals in their trials. AstraZeneca’s target is 50%. The FDA has said any coronavirus vaccine must be at least 50% effective to secure approval from regulators. While the parameters of their clinical trials have similarities, there are some differences, including when and how many times the DSMB can conduct interim reviews to assess whether each vaccine works.

Pfizer is similarly aiming for its vaccine to be 60% effective. The company allows for four interim reviews of the data starting at 32 cases — a schedule that has been criticized by some researchers who contend it makes it easier for the company to stop the trial prematurely.

Pfizer declined to name the individuals on its monitoring committee, saying only that the group consisted of four people “with extensive experience in pediatric and adult infectious diseases and vaccine safety” and one statistician with a background in vaccine clinical trials. An unblinded team supporting its data-monitoring committee — which includes a medical monitor and statistician — will review severe cases of COVID-19 as they are received and any adverse events associated with the trial at least weekly.

“There is an irresolvable tension between speed and safety,” said Dr. Gregory Poland, the head of Mayo Clinic’s Vaccine Research Group. “Efficacy is pretty easy to figure out. It’s safety that’s the issue.”