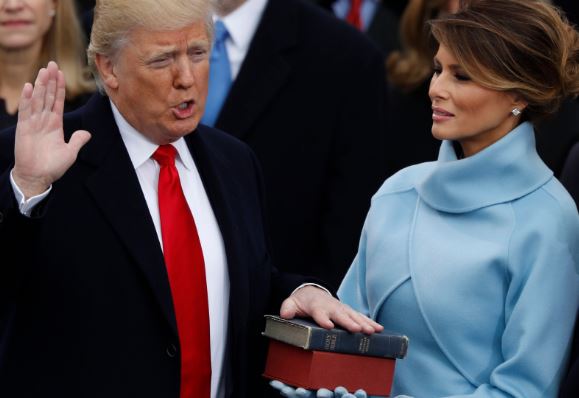 They joined a surge of corporate donors from multiple industries to break inauguration-finance records even as then-President-elect Donald Trump promised to “drain the swamp” of Washington influence-peddling.

But the stakes for the health industry were especially high as the new administration prepared to take power.

Two weeks before Pfizer’s donation, Trump told Time magazine, “I’m going to bring down drug prices.” At the same time, one of his top goals was repealing Obamacare — the Affordable Care Act — and its billions in subsidies for insurance companies and hospitals.

Trump’s inaugural committee raised $107 million, more than twice as much as for any previous presidential investiture. President Barack Obama’s 2009 inauguration held the previous record of $53 million.

No health company gave more to Trump’s event than Pfizer, whose profits for Lyrica, Prevnar 13 and other high-priced medicines could come under pressure if the Medicare program for seniors is allowed to negotiate on cost, as Trump has suggested.

Lyrica alleviates nerve and muscle pain. Prevnar 13 is a vaccine against pneumococcal pneumonia.

Along with several other pharmaceutical companies, Pfizer is the subject of a Justice Department investigation over donations to charities that help Medicare patients avoid copayments for expensive drugs.

Pfizer CEO Ian Read is also a vocal advocate of cutting corporate income taxes, which Trump has pledged to do. The Obama administration thwarted Pfizer’s $160 billion deal to move its legal residency to low-tax Ireland to merge with Botox maker Allergen.

Pfizer’s $1 million donation entitled it to four tickets to a “leadership luncheon” with “select Cabinet appointees and House and Senate leadership,” according to a solicitation brochure obtained and posted online by the Center for Public Integrity.

“As it has been the case with previous presidential inaugurations, we made a financial contribution to the 58th Presidential Inaugural Committee, and a group of our senior leaders participated in various official events,” says Pfizer spokesperson Sharon Castillo. She declined to identify the executives.

Amgen’s inauguration gift of $500,000 was the second-biggest from a healthcare donor. The company makes Enbrel for arthritis and Epogen for anemia, among other drugs.

Amgen’s contribution bought it two tickets to “an intimate dinner” with then-Vice President-elect Mike Pence and his wife, Karen Pence. Amgen CEO Robert Bradway was among seven pharma executives who met with Trump in the White House on 31 January, although that wasn’t part of the inauguration package.

Amgen spokesperson Kelley Davenport declined to comment beyond describing the company as joining “numerous other donors from a diverse group of industries and individuals” supporting the event.

Pfizer also got entrée to the Pence inaugural dinner. Both companies had access to balls, receptions, luncheons, concerts and other events available to lesser donors.

Neither Pfizer, Amgen nor other large healthcare donors to Trump’s inauguration made contributions to Obama’s 2013 inauguration, which did accept corporate money. Pfizer gave $250,000 to President George W. Bush’s 2005 inauguration.

The biggest healthcare corporate donor to Obama’s 2013 investiture was drugmaker Genentech, which gave $750,000, records show. The company did not contribute to Trump’s inauguration. “Prior to the 2016 election, we made a decision not to sponsor any inaugural activities for the foreseeable future,” says Genentech spokesperson Susan Willson.

Contributors to this year’s event also included insurer Anthem, one of the largest participants in the Affordable Care Act’s online marketplaces, and Centene, which also sells insurance plans through the online exchanges. Anthem gave $100,000 and Centene gave $250,000.

Anthem Chief Executive Officer Joseph Swedish was one of a group of insurance executives who met with Trump in February. Swedish met again with Trump in the White House last month, Modern Healthcare reported.

Centene, which manages state and federal Medicaid programs for low-income people in many states, also benefited from the Affordable Care Act’s Medicaid expansion. Analysts see the company as especially vulnerable to a potential repeal of Obama’s health law.